We are thrilled to announce this year’s keynote speaker: 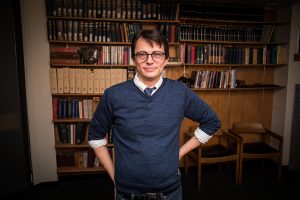 Chris Forster is associate professor of English at Syracuse University, where he focuses on 20th Century British Literature (with an emphasis on modernism) and “digital humanities.” His book Filthy Material: Modernism and the Media of Obscenity (Oxford, 2019) rereads modernist obscenity from the perspective of media history. Modernism and Its Media, a survey of media theoretical accounts of modernism, is forthcoming in the New Modernisms book series published by Bloomsbury. In 2020 he was awarded a Mellon Foundation New Directions Fellowship to study the “Statistical Foundations of Computational Literary Criticism”—which just means he’s trying to better understand math.

Debates about free speech and censorship have retaken a central place in public discourse recently. Yet, as social media platforms struggle over who may participate in their platform and cultural commentators wring their hands over “cancel culture,” questions of obscenity are strangely absent from these debates. The literary causes célèbres of the twentieth century (Ulysses, Lady Chatterley’s Lover, Lolita) lack a clear analogue in our own moment. So what happened? Is obscenity over? Have we reached what the American lawyer Charles Rembar, in 1968, called The End of Obscenity?

This talk tries to answer that question by locating obscenity within a history of media. To understand obscenity, and its apparent absence from contemporary debates, requires locating it within two histories: the first is a history of media technologies, the other a history of the privatization of the public sphere. These forces have transformed what once was called obscenity. The midcentury legal reforms in Anglo-American obscenity that Rembar celebrates occurred in relation to major works of modernist literature–most centrally Lady Chatterley’s Lover. Those reforms ratified an essentially modernist account of autonomous aesthetic value, bringing transgressive literature under the umbrella of state-sanctioned, liberal values. Yet, I argue, this codification is inextricable from the media materialities that undergird it. In the media ecology of midcentury, literature itself came to appear fundamentally less capable of obscenity than other media. We cannot understand Rembar’s “end of obscenity” outside the changing place of literature, and indeed print, in an era of film and television. I make this argument, in part, through a brief “distant reading” of the meanings of “obscenity.”

I conclude by turning to our own media environment, where I argue that the category of obscenity has been replaced by privatized systems of quasi-censorship. I try to sketch a shift from the prohibition of obscenity in the public sphere, which lasted from the eighteenth century until the mid-twentieth, to privatized processes of what Sarah Roberts has recently called commercial content moderation.